How to Deal with a Climate Change Denier

How to Deal with a Climate Change Denier

As more and more science adds to the consensus that man made climate change is a real thing Climate Change Deniers because less and less commonly encountered. But when you do come across these oddities, you can bet they are:

I all cases this makes them appalling human beings, and you are unlikely to change their minds. What you need is the NASA CO2 Graph. It rocks for the following reasons.

The last point is likely to sit  well with any denier, as they probably like big noisy things that look like penises such as space rockets. 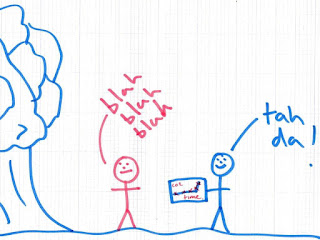 I saw Professor Brian Cox use this graph to very good effect in a TV debate some time ago. There we had some moronic buffoon towing his oil paymasters line, on how the data didn't stack up etc. Well this graph, got a round of applause from the audience, and the dude stopped talking. Amen.

These days it is easy yo look this up on a phone or tablet, and show it to the offender, although my personal favourite is to print on to a baseball bat and hit them on the head with it. If the offender is a co-worker why not super glue this graph to their desk?

Desktop Study
Posted by Kermit Green at 08:48 No comments:

Why we are Not Doing Anything About Climate Change?

Why we are Not Doing Anything About Climate Change?

It may seam that we are doing nothing about climate change, things are happening but not quickly enough.

Who is Doing the Most?


First off we are doing something about climate change. Countries get together to discuss the issue, we describe the problem, we discuss the solution, we set targets. All this is doing something and in some countries meaningful reduction sin CO2 emissions have been made. 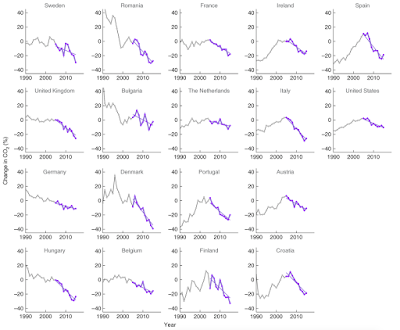 So the west is leading the world in reducing CO2 emissions . . .  .no not really. We may be showing the greatest percentage decreases, but compared to huge manufacturing nations such as China and India, we do not create very much CO2, and what we do create is easier to decarbonise.

Quick Example: It is easy to switch a heating system in an office block from oil to gas and save carbon in the process, we could also add solar panels to the roof and reduce further. It is far for diifcult to decarbonise a steel works, or a cement factory.

What is Getting in Way?

Most people (including politicians) are fully aware that climate change is real and require urgent attention. Unfortunately there are some powerful players who stand to loose a lot of money if we stop using oil and gas. Who, the oil and gas companies.

BP (British Petroleum) for example runs advertising campaigns telling it customers how green it is as company, whilst spending over $50,000,000 (50 million) a year on lobbying the government to benefit the sales of oil and gas.

In total, just in the UK oil firms spend $200,000,000 (200 million) a year on influencing politions to use more oil, and prevent the removal of oil subsidies.

In the same year we give only $9,000,000,000 (9 billion) a year in subsidies to renewable. Now it is worth pointing out at this point that just throw subsides at renewable may not fix the the problem, nor might it be the best solution.

But the fact remains that by subsidising oil and gas we are making oil or gas a more competitively price energy source, which will slow the uptake of renewables.


We need to act quickly and choose the best value options for decarbonising and offsetting our emissions. Efficiency measure such as altering diet, and turning down heating etc. will only get us so far. 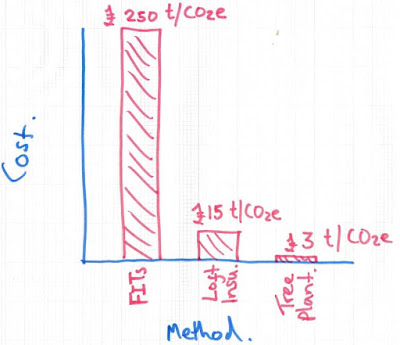 Not all carbon saving measures cost the same amount so it is important that we subsidise the correct ones.  The recently defunct FITs scheme (paying subsidies to electricity generators for renewable energy), cost around £250 t/CO2e, whilst tree planting in a developing country can deliver the same effect for £3 t/CO2e.

This is not to say the Solar or Wind are bad options, but the administration of the subsidies in this case was not good value for money, in term of CO2 reduction per unit of currency.

Posted by Kermit Green at 08:19 No comments: