A quick post to describe location of Taunton Sewage Treatment Works. Click on the link to open google maps.

The waste water treatment works for the county town of Taunton, lie to the east of the town, to the south of the Village of Ham.

The STW (Sewage Treatment Works) discharges in to the River Tone.

Posted by Kermit Green at 05:29 No comments: Links to this post

Why does organic milk have a higher carbon footprint?


Why does organic milk have a higher carbon footprint?

So why does organic milk have a higher carbon footprint? 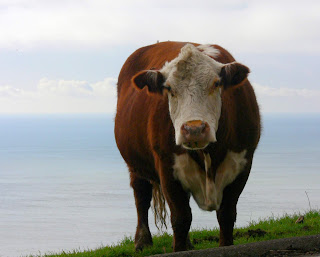 It takes 80% more land to produce one unit of milk than conventional production does. Whilst energy is saved by the avoidance of synthetic fertiliser applications, this is actually being offset by the significantly lower yields and greater mechanical field inputs. These low yields create a negative environmental knock-on effect because an organic dairy farm needs a larger area to produce less milk than a conventional farm.

The energy consumption per functional unit in the on-farm process is around 20% higher on an organic model than it is on a conventional one.
On-farm primary energy use in the organic system is 15.8% 5 higher than the conventional system, while organic milk required 33.9% 6 more fuel per thousand litres of milk.
Furthermore, the organic systems requires approximately a third more man hours than conventional systems. The longer man hours include machinery hours and therefore creating a greater consumption of fossil fuels, in the form of diesel and electricity, increasing organic milk’s carbon footprint.

The organic system can require the spreading of up to 20 tonnes/ha of manure, and the average conventional farm applies around 1100 kg/ha of synthetic fertiliser That is around 20 times the weight difference in transport and management every year. This figure is staggering when you consider the difference in power and machinery hours needed to load, transport and spread up to 20 t/ha of manure compared to a meagre 1.1 t/ha of synthetic fertiliser, having implications on fossil fuel consumption and the carbon footprint. Furthermore, in many cases when an organic farm has insufficient solid manure from its own cows it is actually forced to import organic manure from other organic farms.

Methane gas is twenty three times more potent than carbon dioxide. It is estimated that cows in the UK alone produce up to 500 litres, per cow, of methane every day, a figure so high that they account for 3% of the UK’s total greenhouse gas emissions.
Organic milk’s methane contribution is 18% higher than conventional milk. In the UK showed the figure to be 70% methane in the organic system, compared to 52% on the conventional system.
The reason for the higher production of Methane is that organic cows eat more roughage, this takes to longer to digest than the diet of an animal in an intensive system. Grass is rich in cellulose and other tough components; symbiotic bacteria living in her gut help break down this tough food. Unfortunately, these bacteria emit huge amount of methane while doing this job.  Since and organic cow needs more time to digest, she produces more methane than a conventional cow.

A commercial dairy cow cannot exist solely on a grass fed diet. The additional protein requirements for organic dairy cows create a large carbon footprint in themselves, as the produce cannot be grown in temperate/cool climates. The standards set by the UK’s organic bodies forbid the use of GMO feeds which would lower the amount of carbon used.  Something that is often overlooked is that Soya meal, a key protein rich ingredient is sourced from farms in Asia, South America and the US. These imports are fuelling slash and burn techniques and further deforestation in areas of South America. This shatters the food mile argument from much further down the supply chain, before the manufacturing process of feeds begins and even before feed is synthesised into milk. Whilst Soya meal is not present in all cattle feeds, the environmental impact of long distance goods importation must not be underestimated.

Is Organic Milk Better for the Environment ? Not Really …
https://sustainabilityx.co/is-organic-milk-better-for-the-environment-not-really-23e1eaec882

Google Maps Ranking
Posted by Kermit Green at 07:05 No comments: Links to this post

My Visit to an Abattoir

A Visit to an Abattoir - Introduction


As part of my job I was asked to come and have a look around an Abattoir. This was something I felt I desperately wanted to avoid, but as a consumer of meat I felt a obligation to go and see what was happening.

I should point out that I did not visit the killing area, as that was not required as part of my visit. I did express an interest in seeing this, but I was discouraged with no reason given.


A Visit to an Abattoir - The Good


Perhaps the one good thing which I saw on this trip was the use of cattle skins destined for leather production. These were carefully graded and salted and sent to Italy (I was told) for tanning. Tanning being the process of turning skin into leather.

A Visit to an Abattoir - The Staff


The thing that struck me the most was how unhappy everybody looked who worked at the abbatoir. This is not a job I would like to do.  This is a messy, unpleasant job and it showed in the faces of the people who worked there.

As you can imagine there is a high turnover of staff. The company does not have good employment records (I checked). How does this manifest itself on the treatment of the animals I wonder?

The employees I observed during the visits appear a mixed bunch, with some behaving in a highly ignorant manner.  Dealing with this type of work force requires a certain type of manager, and I can safely say that I did not enjoy talking the the manager in question.

A Visit to an Abattoir - The Waste


All animal caracasses are required to be inspected for blemishes or disease (I am not sure of the exact detail). Whilst I was there I saw 2 whole cattle disposed of. There was nothing visibly wrong with the carcasses, as far as I could see, and this seamed a massive waste.

The animals were separated into useful, and non-useful parts. There were tanks for blood, and bins for unwanted body parts such as hooves and heads.


A Visit to an Abattoir - Trauma


I consider myself fairly thick skinned, but I will not lie. I found the visit traumatic.

Perhaps one of the most distressing parts of the trip was watching the recently severed head of a cow, which had been skinned with the tongue and eyes still moving. I think I will carry this image in my mind until I die.

There must be a big impact on the staff who work in these places, is it healthy to become desensitised to such activities?

A Visit to an Abattoir - The Smell


The smell on site was highly unpleasant, a mix of butcher's shop and farm yard. Blood and excrement.

A Visit to an Abattoir - The Animals


I saw only live animals (cattle) outside the Abattoir, they were herded up a steep ramp. Their treatment did not seem too forceful, but they did look frightened. I do not make this comment lightly as I have worked with cattle on and off for 15 years, and these animals were frightened.

I can only imagine things got worse inside.

A Visit to an Abattoir - Conclusions


I did not see the killing area. In hindsight I am very glad, as I likely avoided some mental scarring. The whole place was like something out of a nightmare, and I would certainly think very carefully about repeating the experience, particularly if I was required to enter the killing area.

I still eat meat once a week but I did not enjoy it for months after this visit. It is easy to become disconnected between the meat on your plate and the squalor I witnessed at this place of death.

As with all things consumer, if this sort of thing disgusts you then vote with your pound / dollar and buy from sources value welfare. I have found Riverford Organic to be very transparent regarding their slaughter processes.

Posted by Kermit Green at 04:10 No comments: Links to this post