Stopping Amazon Smash and Grab . . . not so Simple.

Stopping Amazon Smash and Grab . . . not so Simple.


I have been watching Amazon with Bruce Parry, a series on the BBC has shown a very good representation of the people living along the Amazon. In the lower reaches of the river, the logging industry, gold mining (a Brazilian can earn £70 a week mining gold) and cattle ranchers have a massive destructive effect of the rain forest, all involve clear felling vast areas, and exposing the poor soils to leaching from the heavy rain. I wonder as to what effort we can make to stop this process that ties up so many people in employment. These people rely on stripping these natural resources for there lively hood, and it will take some strong economic factors to alter this pattern. Even if logging were to become. 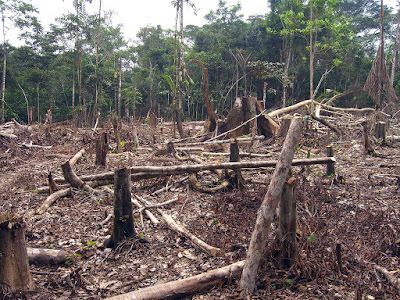 illegal it is hard to imagine a complete stop to felling as it is impossible to police such a large area, in one episode it was shown how three officers had to patrol an area the size of Wales. Impossible. How can we change this entrenched system on to the path of right? Is tourism the answer? Can anything be done under international law, or perhaps international trade? If we prevented the import of Brazilian meat in to this country would that halt the spread of the ranches, or would it push more people in to logging? The minimum wage in Brazil is 200RS a month (£60) a gold miner can earn over 4 times this amount? Change has to occur and occur quickly but how?